Details of the SAFER Schools Act:
• The SAFER (Staff As First Emergency Responders) Schools Act will provide additional specialized training to school employees who wish to receive a SAFER schools designation for a concealed carry permit. The new designation will include law enforcement training created specifically for school employees.
• The SAFER Schools Act also contains a requirement for a district safety plan to be created with the help of local law enforcement.
• The SAFER Schools Act also creates a SAFER schools hotline for students and members of the public to call with tips if they suspect a classmate of plotting to commit an act of violence against the school.
• In an attempt to restrict insurance companies from unfairly raising rates on school districts that allow district employees to be a last line of defense for their students and carry a concealed firearm, a provision was included to require the insurance company to provide actuarial data to show the increase is justified. Also, a greater liability will be placed on school districts that refuse to allow employees the ability to protect themselves and their students, if a shooting were to occur.

School safety and the protection of our children are of the utmost importance to us all.
Our top priority is to implement policies that will harden our schools and protect our children from those intent on doing evil.

Crime research statistics show us that 98.4% of the mass public shootings that have occurred from 1950 – 2116 have occurred in “gun free zones.”

“Gun free zones” are soft targets, which allow those intent on doing harm the guarantee that they will not be met with armed resistance.

Nine states, including Kansas, already allow teachers the ability to carry a firearm to protect students.

Kansas, Wyoming, Texas, Oregon, Utah, New Hampshire, Arizona, Alaska and Rhode Island have laws in place that allow teachers and other school district employees to carry concealed firearms. In Texas alone, over 170 school districts have implemented policies that allow for the increased protection of their students by teachers and district employees.

Florida, Kentucky, Colorado, North Carolina and Alabama are currently looking at joining Kansas as states that will allow teachers and school employees the ability to provide a last-line of defense to protect students.

Last Monday, the Kansas House recognized March 19 as Celebrating Women in Public Office Day. The recognition coincides with Women’s History Month being celebrated in March. The resolution notes that women are underrepresented in male-dominated fields and providing opportunities to support women in public office is imperative.

This resolution serves to inspire other women to serve in their communities. The House also recognized Michelle De La Isla, mayor of Topeka. Ms. De La Isla is the city’s first Hispanic Mayor. Below is a portion of the remarks made by Representative Gail Finney and Representative Brenda Dietrich:

We also would like to take this time to recognize the three women that are currently serving as House Committee Chairs – Erin Davis, Children and Seniors and also Joint Committee on Special Claims Against the State; Kristey Williams, Local Government; and Brenda Landwehr, Social Services Budget. 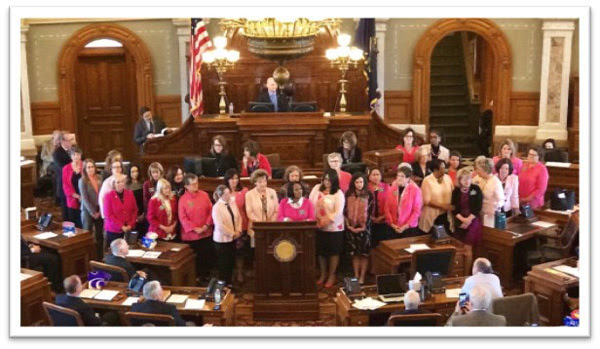 On Friday, the Committee of the Whole debated HB 2778, which would prohibit the state from entering into a contract with a company engaged in the BDS (boycott, divestment, sanctions) movement against the country of Israel. Specifically, the bill would prevent discrimination against the Middle Eastern country by ensuring that vendors contracting with the state do not discriminate against Israel.

HB 2778 does not apply to individuals and sole proprietorships, unlike HB 2409, which was signed into law last year and has been challenged in federal court (Koontz v. Watson). The change to exclude the individuals was made to remedy the potential constitutional violation, of which the ACLU has contended, however the ACLU still opposes HB 2778 and continues to assert that this bill also violates the First Amendment. During debate, Democrats opposed the bill on the grounds that it violates one’s constitutional freedom of speech. Some also articulated that there is no similar legislation concerning boycotts of the Netherlands or South Korea.

Republicans contended that this bill strengthens the bond between Kansas and our prominent trading partner, and would remedy the expressed constitutional concerns from HB 2409. HB 2778 will clarify the Legislature’s intent to protect Kansas’ economic ally, rather than limit the exercise of free speech.

The Kansas State Department of Education provides USD Report Cards both at the district and the building level. The website provides: accountability and assessment data; performance indicators (graduation rate, attendance rate, dropouts); teacher quality; demographics; and other data measurements (NAEP scores, ACT scores, District IDEA plan, archived Report Cards). In addition, short videos about the State Board of Education’s Goals and Outcomes can be viewed.
The website is: http://ksreportcard.ksde.org/

This bill would specify which records must be maintained in the central registry of all Kansas police officers and law enforcement officers, and under what circumstances certain records may be disclosed and to whom they may be disclosed.
Final Action, Wednesday, March 21, 98-23
Bill carried by: Representative John Whitmer
I voted “aye.”

SB 375— Relating to the maximum length of certain vehicle combinations.

HB 2145— Prohibiting the possession of a firearm by certain individuals
Motion to nonconcur with Senate changes
Motion adopted without objection
Motion carried by: Representative John Barker

HB 2476— Including alcoholic candy and other confectionary products to the definition of alcoholic liquor
Motion to nonconcur with Senate changes
Motion adopted without objection
Motion carried by: Representative John Barker

This bill would allow the board of county commissioners of any county that has a redevelopment district that includes property located within a federal enclave, to authorize the installation, maintenance, and operation of water, sewer, electricity and gas to serve the telecommunications and rail services in the area.
Final Action, Thursday, March 22, 123-2
Bill carried by: Representative Rich Proehl
I voted “aye.”

This bill would prohibit a manufacturer from requiring a vehicle dealer to construct imrpovements to facilities or install new signs that replace signs completed within the past ten years that were required and approved by the manufacturer.
Final Action, Thursday, March 22, 123-2
Bill carried by: Representative Barbara Ballard
I voted “aye.”

This bill would specify co-payments applied by a heath carrier for a prescription drug may not exceed the total submitted charges by the network pharmacy, and would also give pharmacies and pharmacists the right to provide a covered person with information regarding the amount of the covered person’s cost share for a prescription drug.
Final Action, Thursday, March 22, 124-1
Bill carried by: Representative Frank Trimboli
I voted “aye.”

This bill would add a ranking minority member to the Joint Committee on Rules and Regulations and the State Rules and Regulations Board. The bill would also require that at the time of drafting a proposed rule or regulation, the agency requesting the regulation must include a description of the businesses that would be directly affected by the proposed rules and regulations.
Final Action, Friday, March 23, 124-1
Bill carried by: Representative Brad Ralph
I voted “aye.”

This bill would remove a requirement in the Vehicle Dealers ad Manufacturers Licensing Act that the holder of a vehicle salesperson license be tested by written examination at license renewal.
Final Action, Friday, March 23, 121-0
Bill carried by: Representative Adam Lusker
I voted “aye.”

HB 2650— Designating the state rock as limestone, the state mineral as galena, and the state gemstone as jelinite amber
Motion to concur with Senate Changes
Final Action: 114-11
Motion carried by: Representative John Barker
I voted “nay.” 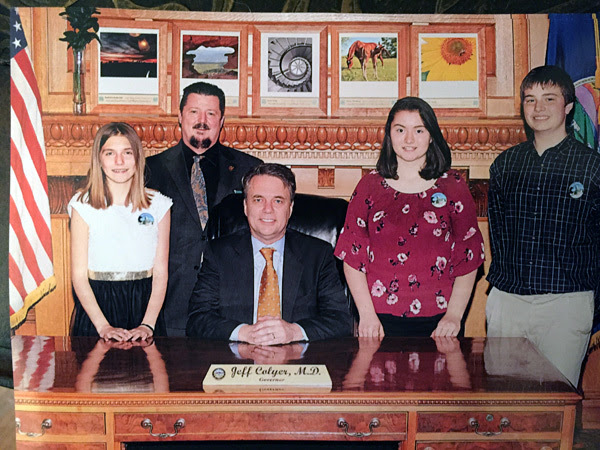 On Thursday, I was happy to see three pages from home: Timmy Tarrants, Ashlee Pratt and Jasmine Williams. They sat in on Appropriations, heard a few bills on the Floor, took the Dome Tour and wrapped up the day seeing the General Government Budget Chair in action.

Rep. Sutton on the Statewide Shutdown

There are no upcoming events at this time.

Rep. Sutton on the Statewide Shutdown

ABOUT US
Gardner Edge is your news, entertainment, music fashion website. We provide you with the latest breaking news and videos straight from the entertainment industry.
Contact us: news@gardneredge.com
FOLLOW US
© 2016 - Gardner EDGE - All Rights Reserved.